Out of this world: review of Icebreaker at Sounds New 2014 by Miscriant

The ubiquitous culture-blogger, Miscriant, has been at it again; here’s a terrific review of the Icebreaker concert at the festival last week, featuring Brian Eno’s beautiful response to the NASA moon-landings footage, Apollo: for All Mankind, a premiere by Ed Bennett, and pieces by Julia Wolfe and Roy Carrol. Plus some lovely photographs. as usual.

The Gravity of the Situation: Apollo for all Mankind playlist

Take a gravity-defying trip through the ambient world of Brian Eno’s Apollo, but make sure you come back down to earth in order to come and hear it live at Sounds New this Saturday…

Saturday’s up-lifting performance by Icebreaker will feature the ensemble playing to NASA footage of the moon landing; the programme also includes a a premiere of Ed Bennett’s Suspect Device and music by Julia Wolfe.

Find out more about the concert here.

Ahead of their appearance at Sounds New, I put Three Questions to Icebreaker’s James Poke.

Tell us about your ensemble.

Icebreaker is a twelve-piece amplified ensemble that has been going since 1989 (indeed we’re celebrating our 25th birthday this weekend!). We mostly play minimalist and post-minimalist repertoire, such as Philip Glass, Michael Nyman, Michael Gordon, Louis Andriessen and so on, plus some forays into non-classical territory – including Brian Eno, whose music we are playing in this concert.

What excites you about contemporary music ? 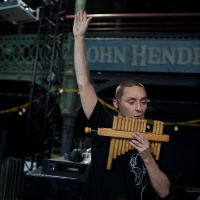 I’ve always been excited by the new. I think the most important thing about new art is the way it reflects and comments on the times we live in, telling us things that we otherwise couldn’t consciously know. Music of course does this in a very abstract way, and therefore it tells you the things you can’t find a way to put into words – such as, in this concert, Julia Wolfe’s extraordinary reflection on what life felt like in New York after 9/11 or Brian Eno’s evocative impression of what it feels like to go into space.

What can we expect from your performance at Sounds New

Our performance is a bit of a game of two halves really. In the second half we play our version of Brian Eno’s classic ambient album Apollo, in an arrangement by Woojun Lee, which is accompanied by emotive footage of the Apollo moon landings from Al Reinert’s film For All Mankind. For this project we have the privilege to be working with famed pedal-steel guitarist B J Cole as a featured soloist.

However the first half of the concert is all new music for us, and is the start of our new “Recycled Project” (which is being supported by Sound & Music) – which will eventually include 5 new works written specifically for it (including one by Sounds New Artistic Director Matt Wright), as well as a new arrangement. We’re premiering 3 of those 6 pieces in this concert – Ed Bennett’s Suspect Device, a piece which “recycles” material from the Stiff Little Fingers song of the same name, an intriguing new piece by Roy Carroll, which uses manipulated material Roy recorded of the band playing, which is then played back to us to re-interpret, and a new arrangement of Julia Wolfe’s Big Beautiful Dark & Scary.

This new project is a great opportunity to work with some younger composers, find new repertoire for the band, and push the band into new areas that we haven’t tried before – taking us out of our comfort zone. I think the results will be very exciting.

Find out more about the Icebreaker concert at Sounds New on Saturday 3 May here.

Thanks to James for his time!

In a few week’s time, Icebreaker Ensemble brings a premiere, Suspect Device, by Ed Bennett to Sounds New. Intrigued, I talked with Ed about the piece and the background to the new work.

DH: I’m intrigued by the title of your piece – it sounds potentially explosive! – from whence did the inspiration come ?

EB: Suspect Device recycles material from the original song of the same name by Northern Irish Punk band Stiff Little Fingers. The band who were mainly active during the height of the Northern Irish ‘troubles’ in the late 1970’s and early 1980’s provided optimistic and energetic anthems for the disaffected Northern Irish Youth culture who wanted nothing to do with the violence and political rhetoric of the time (myself included). My work attempts to capture the spirit and energy of the original music but reinvents the original musical material in my own way. When I worked in a supermarket as a teenager we had to look for ‘Suspect Devices’ at the end of a working day (I’m sure that wouldn’t be legal now ?!).

DH: How did you come to be working with Icebreaker ?

EB: Icebreaker were one of the first contemporary music groups I ever heard live (almost 20 years ago in Belfast), it was hugely inspirational and since then I’ve always fancied the idea of working with them. James, the group’s artistic director, got in touch with me saying that he’d heard my music and liked it so I proposed that I wrote them something at some point. That was a few years ago but now it has finally come to fruition.

DH: Was Icebreaker closely involved with the piece from the start, or does their involvement come after the piece is finished ?

EB: They were involved in so much, as I knew their repertoire and ethos well and I knew the context in which the piece would be featured. James had this idea of recycling material from existing work which is where Suspect Device came from. The piece later becomes refined in the rehearsal process with them, I’m very open to changing things in this process.

DH: Did you write the piece specifically for the players in Icebreaker, and if so, how did this inform the compositional process ?

EB: Yes. As above really. My music is often very pulsed and rhythmic, as an ensemble Icebreaker specialise in tackling work like this.

DH: You cite Joni Mitchell and David Byrne amongst your musical influences; what do you draw from two such disparate figures ?

EB: Well, I think I mentioned that I like their work in the context of lots of other stuff. I have very broad listening tastes and the music I write is not necessarily clearly influenced by that which I listen to; it could be in some more subtle way for example the melancholy in Mitchell or the energy in Byrne. I wasn’t thinking of either here though.

DH: Does directing your own ensemble (Decibel) have an influence on your composing ?

EB: Yes, definitely. Being outside of institutionalised ensembles and organisations allows you to be much freer in your approach. The best way to make music is with friends who completely trust and commit to your work. The way it should be.

DH: What are you up to post-Sounds New next moth ?

EB: I have new projects with the Crash Ensemble, Decibel, the pianist Xenia Pestova and I hope to finish a new CD of my work for release at the end of the year.

Find out more about Icebreaker and Suspect Device at Sounds New here.

With thanks to Ed for his time!