One of the composers who appeared at Sounds New last year, I recently caught up with composer Matthew Kaner, and asked him about what life has had in store since last May.

What have you been up to since your ‘Gauguin Sketches’ appeared at Sounds New last year?

I’ve been very busy since the Sounds New concert! In June, I had a new piece for large ensemble, Fantastical Fragments, premièred in the Aldeburgh Festival, and then quickly boarded a plane the following morning and set off for Tanglewood in Massachusetts to take up a composition fellowship for two months! As part of my fellowship, Gauguin Sketches was given its US première in July in Seiji Ozawa Hall by the New Fromm Players (here’s a live recording of the performance):

END_OF_DOCUMENT_TOKEN_TO_BE_REPLACED

Going from strength to strength, I caught up with composer and conductor, Benjamin Oliver.

What have you been up to since Sounds New last year?

It’s been a quite a busy year!

Over the summer, leading up to the performances in December, I was involved in the final stage of the International Composer Pyramid, run by Sounds New and Coups de Vent. I wrote a new piece for the competition, Prelude, Fugue and Riffs. I didn’t win this time but was delighted to be voted best piece by the audiences in the UK and France and also by the musicians playing the music!

Apart from my composition work I also began a permanent position as Lectureship in Composition at the University of Southampton in October. I have worked in various roles at the University for a couple of years but it’s great to be working full-time and helping develop the new music activities within the music department.

END_OF_DOCUMENT_TOKEN_TO_BE_REPLACED

From the archive: Workers Union Ensemble

Under the baton of composer and conductor, Benjamin Oliver, the Workers Union ensemble performed an eclectic lunchtime concert programme which included Two Elegies Framing A Shout for soprano sax and piano, delivered with astonishing accomplishment by saxophonist Ellie Steemson and pianist Edward Pick. A lyrical first elegy for unaccompanied sax, requiring sustained control of lengthy phrases, is followed by the Shout, in which spiky gestures are punctuated by periods of tense silence, before opening out into a real tour de force for the saxophonist over restless piano riffs. The second Elegy is familiar from Turnage’s epic Blood on the Floor, a beautiful, jazz-hued movement with weaving melodic lines over rich jazz-inflected harmonies. Saxophonist Ellie Steemson demonstrated superb control of her performance, delivered with conviction and commitment and consummate lyrical skill. The piece as a whole is a fine riposte to all those who claim that ‘modern music has no melodies;’ next time you hear it, point them gently in its direction… 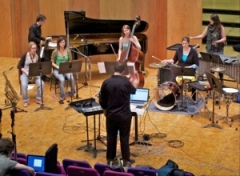 The programme also included Benjamin Oliver’s Ripped Up, for the complete six-piece ensemble. Delicate opening piano chords lead into a driving groove pitching four-against-three rhythms; an elegiac episode interrupts with a cluster-chord, and showed some careful textural writing in the creation of some effective woodwind and percussion sonorities. A ticking shaker sees time fragmenting in its erratic utterances, whilst the piano picks out some gossamer-thread shapes above hushed, low saxophone trills; but the rhythmic impetus is not to be denied, and returns with driving momentum. The faltering ticker interrupts once more, accompanied by haunting mobiles from the xylophone that fall across the barline, before a hesitant conclusion sees the piece finishing with wide-eyed expectancy.

A fascinating programme, delivered with real accomplishment by youthful former members of the Guildhall School. Expect to hear more from them, and from Benjamin Oliver in the future.

(And for anyone who couldn’t make the concert, here they are performing the piece in concert in 2011.)

Originally posted 14 May, 2012 by Daniel Harding

Ahead of their concert at Sounds New on Monday 14 May, saxophonist and group-member, Ellie Steemson answers three questions about the youthful and vibrant ensemble, Workers Union.

Tell us about your ensemble 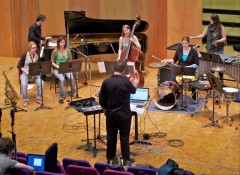 Workers Union Ensemble initially came together for a performance of Louis Andriessen’s epic work of the same name whilst its members were studying at the Guildhall School of Music and Drama. Since it formed in 2008, the group has evolved into its unusual six-piece line-up consisting of sax, oboe, piano, double bass and two percussionists, under the direction of conductor, Ben Oliver.

What excites you about contemporary music?

Close collaboration with composers is central to our work. We are gradually building up a set of works commissioned specifically for the ensemble with the addition of one or two new pieces at each performance. Working in this way has led to the development of a process of interaction between us and composers which gives a great sense of energy and excitement.

What can we look forward to in your concert ?

Workers Union are very excited to be performing at Sounds New on May 14th. We will be presenting a brand new work by Ryan Latimer as well as works previously written for the ensemble by associated composers Matthew Kaner and Ben Oliver, and two works by British stalwarts Michael Finnissy and Mark-Anthony Turnage.

Here is Workers Union in concert in July last year, performing one of the pieces featuring in their Sounds New concert, Gaugin Sketches by Matthew Kaner.

And, from the same concert, another of the pieces coming to Canterbury, Ben Oliver’s brash, groove-inflected Ripped Up.

With thanks to Ellie.